My Review of Lenovo T440s

This is my review of Lenovo T440s. It doesn’t cover much. It’s more like notes about things that have annoyed me with this device.

I knew that touchpad wasn’t good before buying this device. No review that I read has skipped that point. I thought, how bad it could be? Maybe it’s not as good as the -now- old design, but it should be a decent touchpad. After all there are no other products -that I know of- that has the famous touchpad of the Lenovo Thinkpad series. Well, I was wrong! This touchpad literally sucks! I can’t believe Lenovo decided to ship this beautiful product with this touchpad. It’s stupid but a few times I found myself thinking: have they deliberately tried to make this worse?

First of all, physical buttons are gone. You should have noticed that already.

When touching the touchpad (not clicking), it shakes and makes sound. It’s really annoying, and feels cheap. Like similar devices, whole touchpad is a button. But to for a click, you have to apply a decent amount of force. No problem, you can use touch-clicking. But this doesn’t work for right click. You have to actually press down the touchpad for a right click. When pressing the touchpad, cursor always moves around and I miss my target, which is really really annoying. It’s almost impossible to right click without cursor moving around (and sometimes messing things up).

There are two red markings on the top side of touchpad that I thought indicated left and right click. Nope. It’s left click everywhere, only right bottom side is right click. But when using the trackpoint right top side is right click. Middle click? There are markings on top middle, but no middle click. I think this works when using trackpoint, but I haven’t figured out that yet. I never knew that using a touchpad would be that confusing.

Palm rejection isn’t good. Touchpad area is quite big. When typing, my thumb touches the touchpad and this moves the cursor around, clicks etc. The fact that I have to focus on the position of cursor right now writing this blog post, is annoying.

By the way touchpad actually have a really nice surface. It feels nice to touch and move your finger around.

Keyboard is nice. I’m no lenovo expert, but this keyboard is as good as t530 (previous lenovo laptop that I had used).

Keyboard back light has two levels. You can switch between off state, half brightness and full brightness by pressing Fn+Space keys.

By default you have media keys in place of function keys. If you want to press a function key you can use Fn key. That’s not a big issue, you can press Fn+ESC and lock Fn key. Now, top row keys act as function keys and to use them as media keys you press Fn. When locked, green led of Fn key will be on, so that you are not confused.

I heard about brand new laptops having trouble with connecting to wifi, but I never heard one that crashes the wifi network! Yep. This device has crashed (and will continue to crash) my entire wifi network. I couldn’t connect to wifi from other devices, I had to restart the router and the wifi adapter of the other devices to be able to re-connect them. It’s a mess! I have found some reports that stated; this problem is caused by some Lenovo software, but I couldn’t find the exact problem yet (that problematic lenovo software doesn’t exist on my device).

After installing linux I didn’t have much issue with the wifi. It’s just that sometimes signal goes away, and I have to restart the internal wifi adapter for it to work. But It’s rare, and it might be an issue with the wifi router I’m connecting to.

Generally LCD is good. It’s bright and viewing angles are spectacular. There is a little light bleeding on the edges – which is a common problem with all IPS displays. I only notice it when watching something fullscreen. It starts to be annoying when you watch things frequently.

But something else I keep noticing is a display artifact similar to a dead pixel. I’m not sure if it’s a dead pixel or not. It looks like a small, tiny 1-2 pixel wide shadow on the screen. It’s not really annoying. But still, I wish it didn’t exist.

This one isn’t exactly a product defect like others, but still, it’s an issue that I had to solve. Device disk came with 4 partitions already. Boot partition, system partition, recovery partition, some unknown partition.. And I learned that to be able to create another 5th partition I had to convert one of these to an extended partition which requires me to delete the system partition.. Isn’t that awesome!

Second day after I got the device, I have installed Linux Mint Debian (Cinnamon desktop) on it. Here is a list of problems I have encountered so far.

Laptop has an aluminum body which contributes it to look really sleek and still be lightweight. But actually design of the case has a serious defect. Maybe my unit has this problem, I don’t know. To see what I’m talking about please have look at the below photographs. You should have noticed the unfortunate scratches. These scratches are caused by the laptop lid. Even tough laptop lid has a rubber material on its edges that (I think) should have prevented this issue. But it seems that, this doesn’t work because inner part of the laptop lid, is too thick. Inner edges of the LCD (which doesn’t have any rubber) touches the bottom body of the laptop and causes these scratches. With all the small issues this is the most saddening one. It’s been only a few months and my laptop already looks old 🙁 . 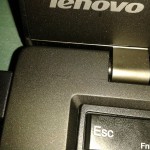 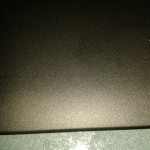 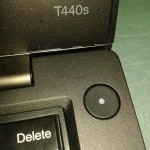 Also when lid closed, keyboard touches the LCD and occasionally I have to clean the grease left from keys touching the screen (actually I wash my hands quite frequently). I hope this doesn’t cause a permanent problem in the future. I have been planning to use this laptop for a long time.